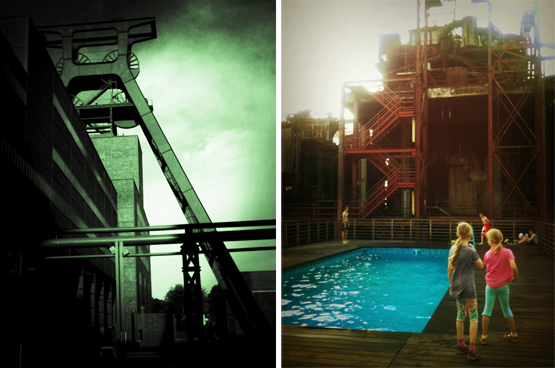 Wow! That was a blast! Not only did we work, explore and play on one of the most interesting ex-industrial sites of Europe – the Zeche Zollverein – but also experimented successfully with local weed and beer to be transformed into film developer! 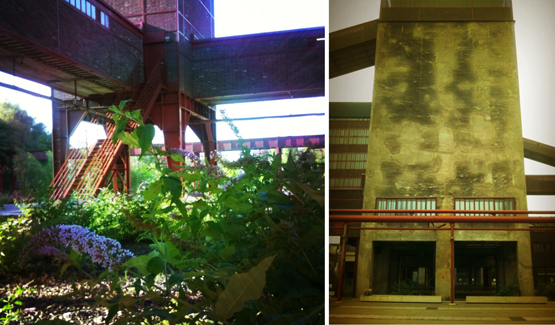 I was honored to be invited as a kind of side workshop within a travelling exhibition: „examples to follow! expeditions in aesthetic and sustainability“ that is distinguished by the German UNESCO Commission as Decade Project of the UN Decade in Education for Sustainable Development 2014.

They say: „We need visions of a sustainable life that interconnect with the sensuality, lust and passion of acting on our own. examples to follow! intends to encourage this and to move the cultural and aesthetic dimension of sustainability into the awareness of the senses, thus counteracting the visible erosion of the term. The exhibition aims at raising awareness for the fact that a constructive sustainability cannot make do without the arts and sciences. It needs to learn from them how to think in transitions, interim solutions, models, and projects.“

13 participants and me … strolling around with our super 8 cameras, filming and then developing these films using a mix of coffee / beer (Stauder-Pils) / flower tea + vitamin c and washing soda. Using what we found, filming our surroundings. Embracing coincidence. And the results? Marvellous! Black & white negative films (being telecined right now to be published here and there).

Being on a coal mine / coking plant territory, admiring the gigantic industrial complex as well as the power of flower – nature taking over – history of coal miners and the lives they spent working like hell in a black and hot hell 1000 meters below the surface and above … using these flowers and their beer to develop „working man’s small format“ super 8 film … well somehow I felt enchanted!

More about the Zeche Zollverein, taken from http://en.wikipedia.org/wiki/Zeche_Zollverein:

The Zollverein Coal Mine Industrial Complex (German Zeche Zollverein) is a large former industrial site in the city of Essen, North Rhine-Westphalia, Germany. It has been inscribed into the UNESCO list of World Heritage Sites since December 14, 2001 and is one of the anchor points of the European Route of Industrial Heritage.

The first coal mine on the premises was founded in 1847, mining activities took place from 1851 until December 23, 1986. For decades starting in the late 1950s, the two parts of the site, Zollverein Coal Mine and Zollverein Coking Plant (erected 1957−1961, closed on June 30, 1993), ranked among the largest of their kinds in Europe. Shaft 12, built in Bauhaus style, was opened in 1932 and is considered an architectural and technical masterpiece, earning it a reputation as the “most beautiful coal mine in the world”

As with most sites of the heavy industries that had been closed down, Zollverein was predicted to face a period of decay. Surprisingly, the state of North Rhine-Westphalia (NRW) bought the coal mine territory from the RAG immediately after it had been closed down in late 1986, and declared shaft 12 a heritage site. This went along with the obligation to preserve the site in its original state and to minimize the effects of weathering. In 1989, the city of Essen and NRW founded the Bauhütte Zollverein Schacht XII that should take care for the site and which was replaced by the Stiftung Zollverein (Zollverein Foundation) in 1998.

After it had been closed down in 1993, the coking plant was planned to be sold to China. The negotiations failed and it was subsequently threatened to be demolished. However, another project of the state of NRW set the coal mine on a list of future exhibition sites resulting in first gentle modifications and the cokery also became an official heritage site in 2000.

On its 25th session in December 2001, the United Nations Educational, Scientific and Cultural Organization (UNESCO) declared both the sites of the shafts 12 and 1/2 and the cokery a World Heritage Site. 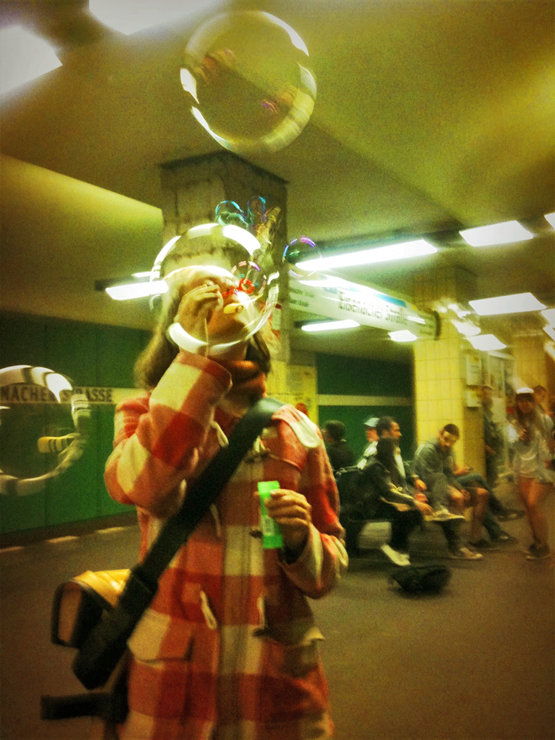 I’m moving on. This is me on Tempelhofer Flugfeld Ex Airfield, great public park, gigantic recreation city area and lark breeding station! They sing!
I collected some herbs and made a very strong tea. Smelled like hay and summer. Added vitamin C and washing soda. Developed a piece of sheet film (black&white negative). Wow!