Heart in Tree, Birds in Tree 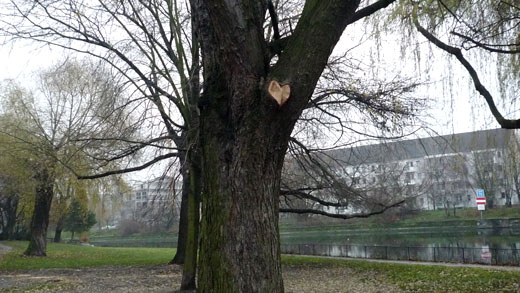 Back in Berlin, riding on my bike through a park again, it’s dark and grey but I know: in 4 weeks the days will start to get longer again! Thinking about that I found a heart and I heard and saw hundred tweeting birds on a tree top!
Happy wintertime 😉 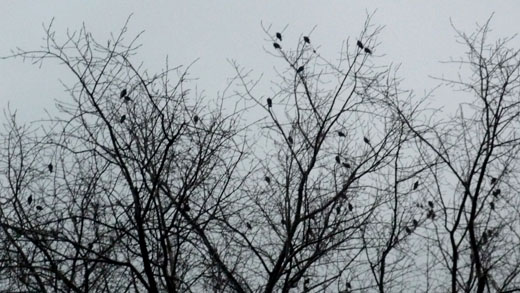 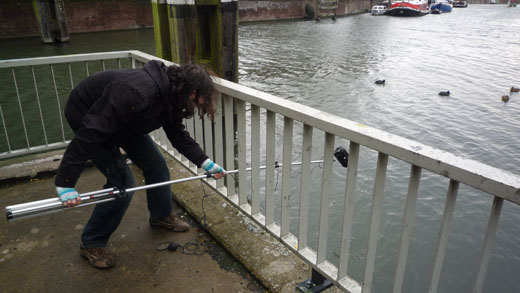 This is Mathijs dumping an underwater camera and attracting ducks!!!!! Which was by the way a totally hard job because they somehow were afraid of the camera and instinctively felt it … We had to throw a lot of bread pieces (btw nederlandse supermarket bread is incredibly soft and sandwichfriendly but that is another story) and when the seagulls communicated that the area was safe then the ducks came … slooooowly ….
Filming needs patience but it’s always worth it. 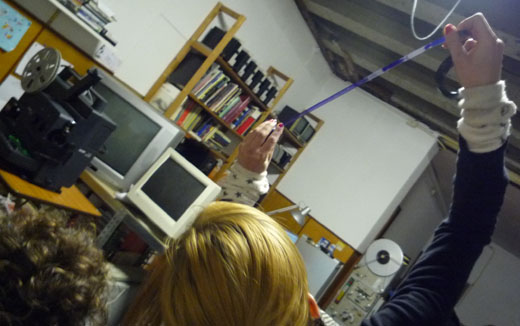 This is Mariska and Britt checking a freshly processed color Ekta film!!

Wow, that was an intense day 😉
Filming paperships, swans from underwater, burning tea-saucers, sofa patterns, bridges, workers, seagulls. And it was also a darkroom day, spiraling film into Russian tanks, diving in chemicals, the magic moment when a film sees for the first time the projector light: blurring night lights (the magic B!!), snow traces, backwards walking sign-seekers, living trousers, subway lights, scary lamps … and more.
To be continued! 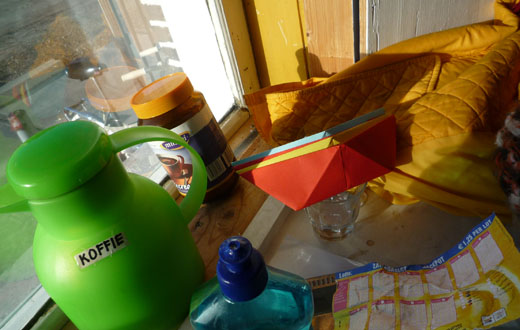 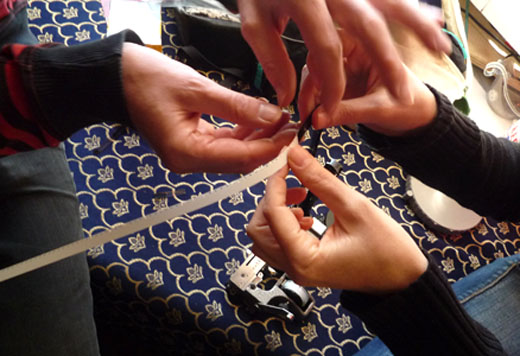 What I really begin to like about this WORM place is beyond other the beautiful bar.
They made everything from recycled material – I especially like the tables and chairs – and they got little chewing gum sacks (for spitting them out before drinking!)
So clever! 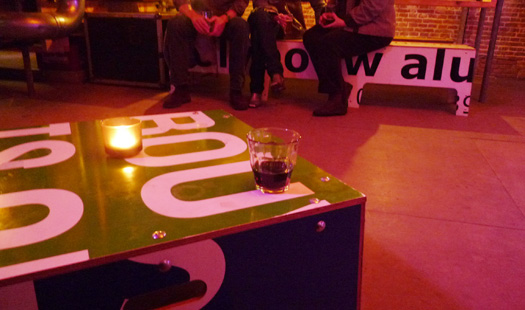 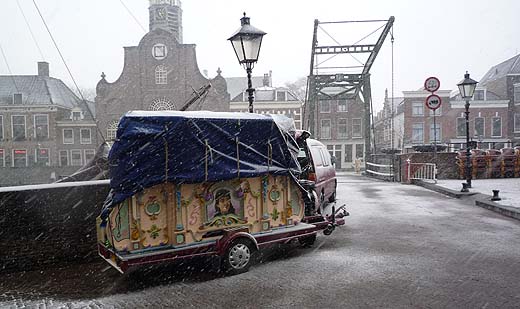 Second Workshop day – out door experiences! 4 groups on the tracks and traces of coincidence, finding things and filming their trip. To be processed tomorrow …
I went with Esther, walking. It snowed. At one corner we were attracted by kitschy organ music (Holland clichee 🙂 and found a half covered organ from at least 2 centuries ago playing joyfully for itself.
What will the others have found? Was coincidence playing with them? We’ll see …

The Worm isn’t only an inviter of short film makers but also a host of illustrious events such as tonight a bunch of guys presenting the Cassette Culture of the ex GDR (release of book+DVD) – very fascinating insight in the 70s and 80s underground of East German music.

And then, featherlike snow outside, warm synthesizers and red wine inside, there was Tarwater playing.

Somehow makes we want to be a hunter and collector of weird sounds. I’m quite sure that we’re going to set up a super 8 wabi-sabi band here on Monday … 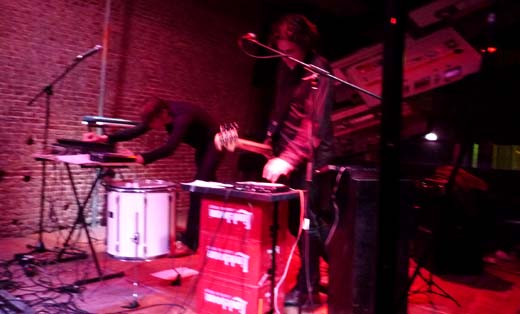 Yesterday it started to storm really heavily and today it was all fresh and cold and we had an amazing light outside, very melodramatic. Perfect for the first day of Wabi-Sabi-Filming!

My students are cool, the place is great, the weather plays with us, the first black+white processing made the first group film a masterpiece! More to follow. Tomorrow we will have some outdoor experiments, challenge coincidence to take us on a trip through Rotterdam. I’ll be back!!! 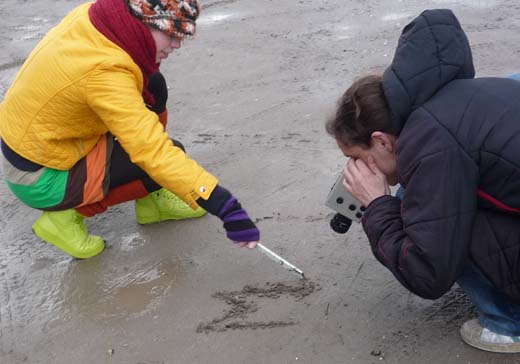 On my way do Rotterdam yesterday (first plane then train no boat so far) something really funny happened … there was a young man on the train looking for the toilet and he mistook the emergency break for the toilet door handle. He just pulled it, it went all smoothe, almost like in slow motion, far too easy for an emergency brake in my opinion. The train slowed down and me and my fellow travellers burst into laughter realizing what happened. The young man just stood there, fully ashamed, and then came another friendly young man, obviously an employee, checking what had happened, he saw the desaster, said „don’t do it again“ with a smile and the train continued its way. A great example how to solve problems of misbehavior! 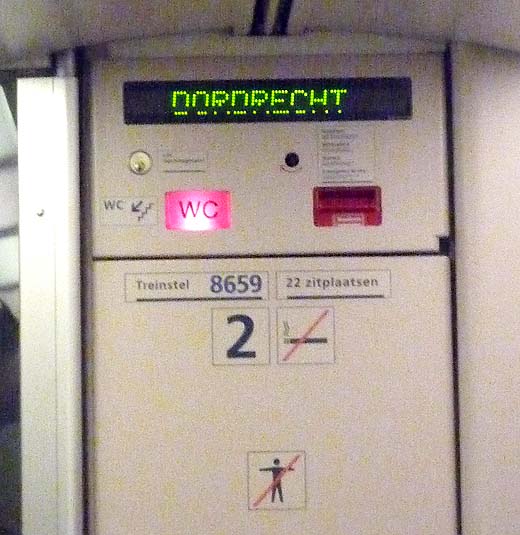 I went on my bike from Alexanderplatz along Karl-Marx-Strasse (East-Berlin) and I saw a sad old house on the left, dead windows, void. With metal bars on the roof that obviously held letters before its death. I can’t remember what was up there, they look very cyrillic. Does anyone know? The first 2 look like an E and a P  (P = cyrillic R). 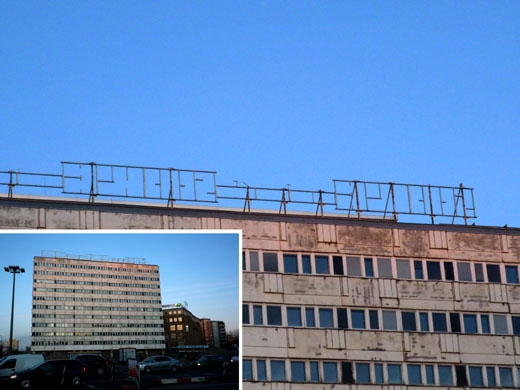 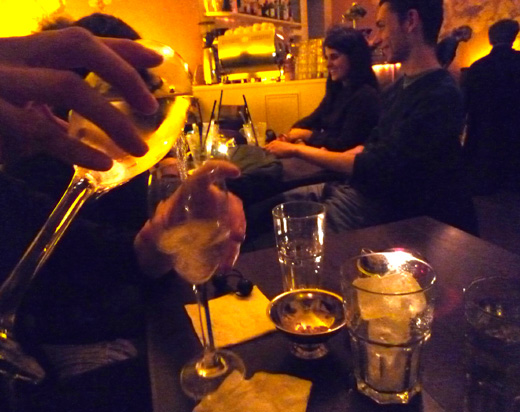 My friend Nadine is in town! (She’s on a job in Heidelberg for 3 months and now she’s home for a couple of days), we met at our favourite bar around the corner, open day and night, outside and inside, called Goldmarie (Grimmstr. 29/ Böckhstr. in Kreuzberg).

It’s a beautiful calm place with good not-expensive wine and coffee and tasty small food, wonderful shell-tiles-lamps and a good view at the canal and Admiralbrücke.

There was a group of people sitting at our neighbour table drinking interesting drinks including coffee and Baileys and whipped cream on top (supposedly they felt cold because they were supposedly Italians) and we felt somehow at an instant connected to them and to the whole world and to buzzing pulsating swinging Berlin-at-the-moment and a little weird with our white wine and sparkling water and extra ice cubes (supposedly we felt warm because we are supposedly Northwesterns?)

I don’t know why they call their bar Goldmarie, but anyway Goldmarie it is a character from a fairytale, the opposite part is Pechmarie (Pech means misfortune) and it has to do something with Frau Holle (Germans click here), let me check it in Auntie Google and I’ll be back 😉 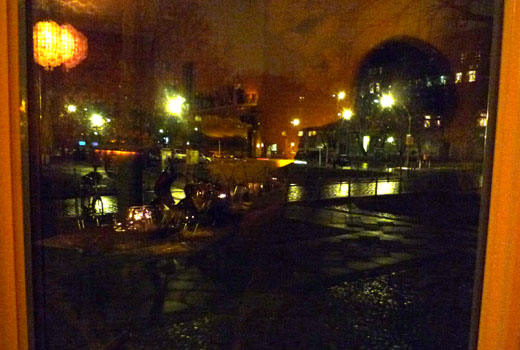 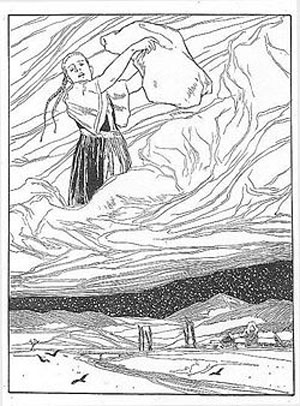 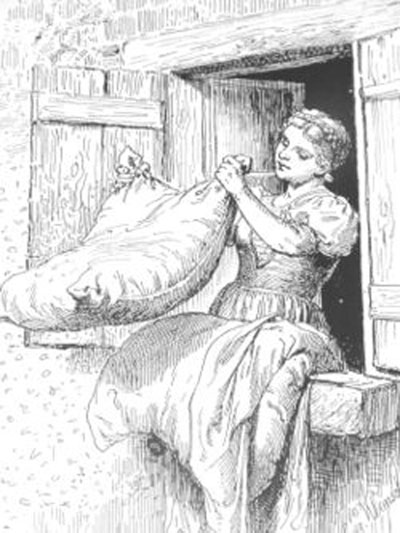 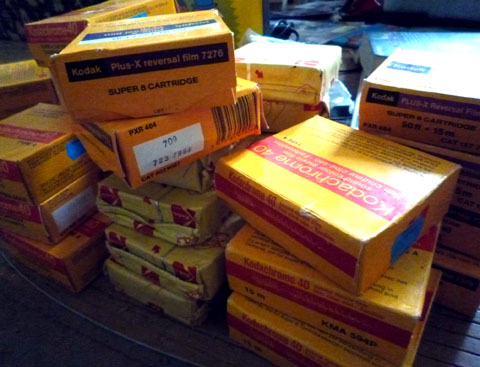 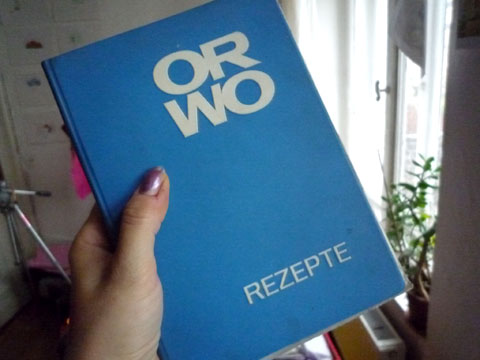 My brother Bernd, his son David and myself went to see our parents (and to teach them the world of internet with their new computer ;-)) for a 2 days holiday. They live very close to the Baltic Sea which is quite cold and grey at this season but beautiful nonetheless. The colours merge somehow to mud. Sometimes the sun comes through, very white, very glistening. Feels very much like years end!

Whoever and whereever Eddy and Svenja are – good luck! 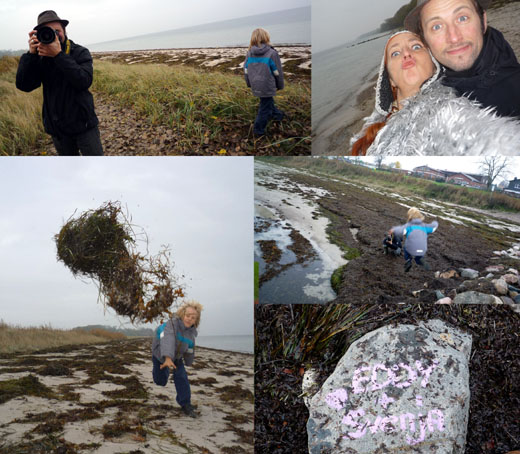 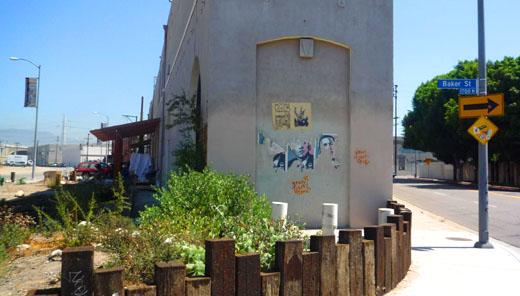 Just wanted to let you know about my old-fashioned Kreuzberg-feelings (I’ve been living here for more than 20 years now) and I found out that it’s really the part to be. Tough, hardly beautiful, green. Fuck Mitte, spit on Prenzlberg. It’s Kreuzberg.
There are a lot of great stores to buy Berlin fashion in the Oranienstrasse. Well-priced and fantastic. More info later, I just happened to fall on a warm dress today that will keep me from my winterfreeze. Thank you. 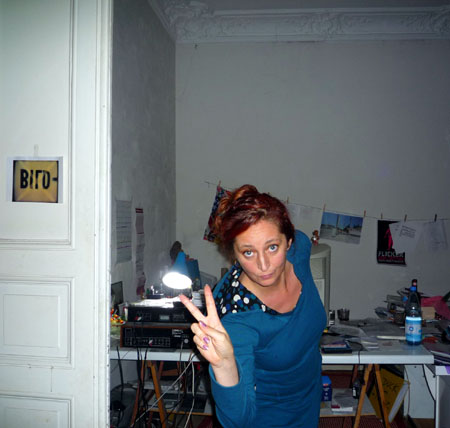 The Latin word for chili is capsicum [The original Mexican term, chilli came from the Nahuatl word chilli or xilli, referring to a huge Capsicum variety cultivated at least since 3000 BC as evidenced by remains found in pottery from Puebla and Oaxaca.]

I grow them on my balcony and today was harvest day! They are HOT! 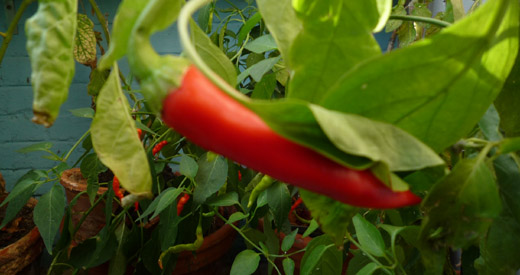 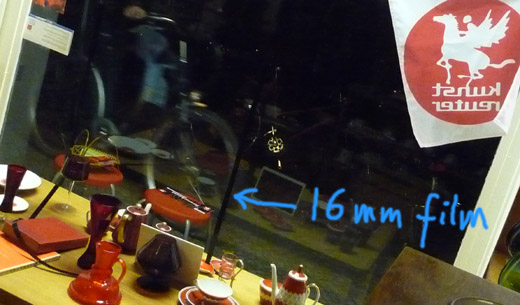