This is for specialists only  never try to self-process an Ekta 16mm film that has lived more than 20 years outside a fridge. Deborah Phillips my friend and I didn’t believe Mr Draser, the god of Andec, who refused to process her 30 meter long film because of that reason (it would ruin the developer baths with all the black gelatine particles).
It did exactly that. All the beautiful filmed scenes, all work, all images got dissolved in the first two baths. Though  it was fun to do that dirty bucket processing again (30 meters of 16mm film is too much for a Russian tank) so we – thanks to Fernando – occupied a darkroom, set up the scene: 4 buckets, some towels, hot water to keep the chemicals in appropriate mood (38 degrees centigrade), plastic gloves, and my new invention: who tells you the exact countdown time of 6 minutes when you’re in absolute darkness? No red light allowed! So I recorded a kind of down-counting voice with some nice weird music telling every 10 seconds where we are!
Anyway  it all went shit. So we strolled away to have one two drinks around the corner at Syndikat. Good white wine!
I noticed a cat opposite to the bar, it balanced nicely on the balcony rim, said hello to the tree leaves, looked at us and then returned back inside. It was a lovely day anyway! 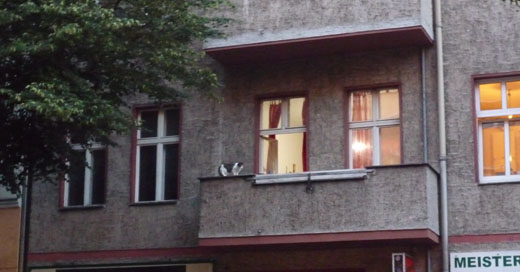