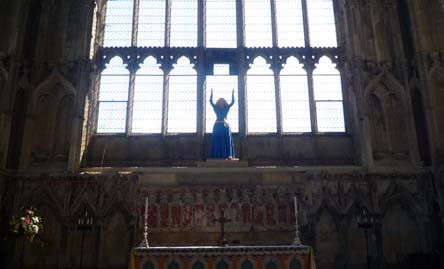 Thank you Carla for taking me out on a ride to Ely, North of Cambridge. We played tourists and went to the Cathedral, founded in 673 by a young Saxon princess called Etheldreda.
For me (who really despises all sorts of organized powerful religions worldwide) the most amazing discovery was the Mary statue in a sort of light and joyful section of the church: Mary with golden hair and a sexy blue dress, one foot over the rim, definitely channeling something from earth to heaven or sun or vice versa. Totally powerful and positive!

Then we found a lazy bishop and some interesting colorful glass paintings, homoerotic maybe?! 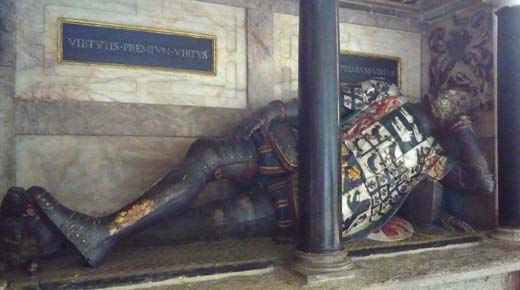 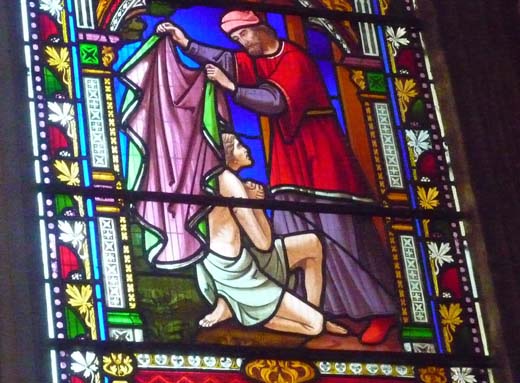 I had a funny pleasant flight from Berlin to London Stansted yesterday: just 10 seconds before landing, about 20 meters from the ground, the plane went wwhoooooosh and up in the air again for an extra round! The Captain said something like bzzz bzzzz tower bzzzz bla …. Weird ….

See me and Tony and Clara and Simon testing cider: 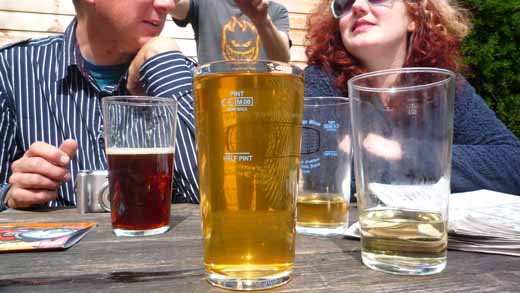 Me and Clara discovering interesting shops: 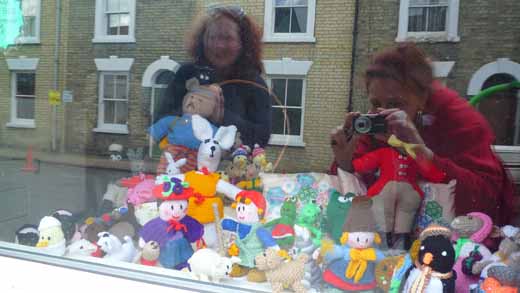 …. and this is the magic Reality Checkpoint in the middle of a huge park (the saying goes there once was a hippie on a wacky trip strolling around and … I forgot the rest, have to ask Clara later! I’ll be back!! 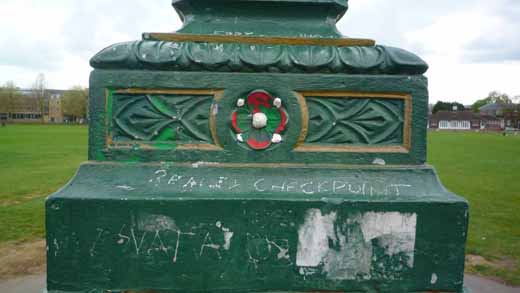 He lives here in my front street trees! He sings the sweetest melodies!
He plays Q and A with his mates! I love him! My Blackbird!
cityamsel2.mp3 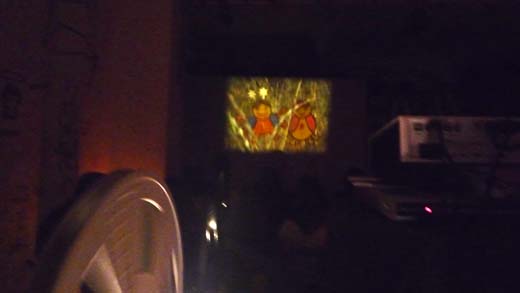 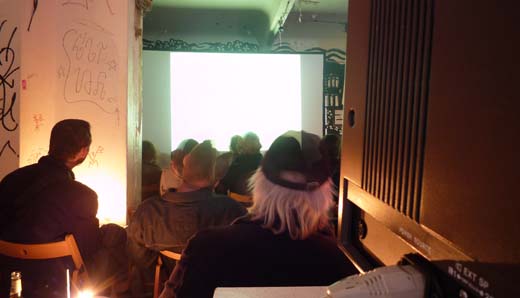 today: Taubenkackewegmacher / pigeon shit remover.
Seen at Kottbusser Tor, a place where pigeons live and die and shit forever.
He held a thing in his hand that pretty much looked like a laser sword from Star Wars. Unfortunately without the zmmmm-zzzmmmmm noise.The smell was gruesome. 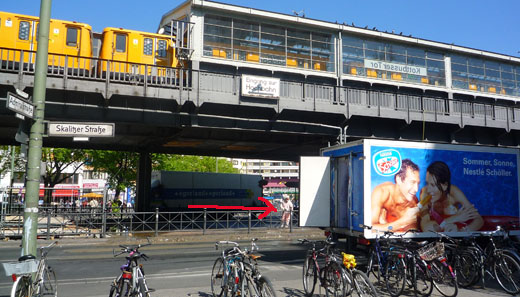 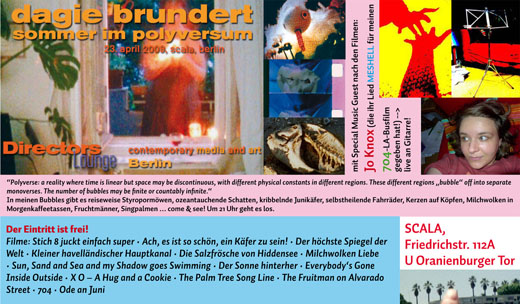 Greetings from my Boat 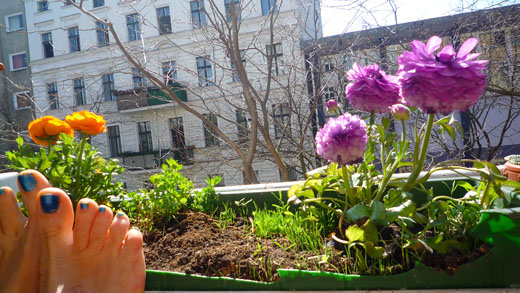 I guess this is one of my many balcony photos coming up this long endless colorful warm summer 😉
It’s Eastermonday, another holiday here in Germany, I feel like living in a postcard, and here is the sound of it: ostermontag.mp3

Happy Easter everybody!
Surprise! The Easterbunny exists  he laid some chocolate surprises in front of my door! Thank you, mystery being! 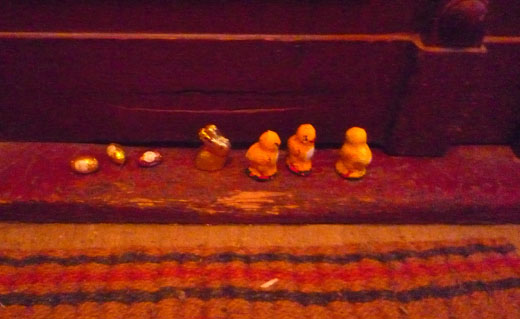 The story continues: me and Khani we’re on the hunt for small bands with big souls. Today I (Khani unfortunately lies down with a summer flu) was washed up at a small great club called Zosch (Tucholskystr. 30, Berlin-Mitte, felt like a wine-cellar!) and experienced OHara, a 5 men band from the US and Germany, nicely blended 🙂 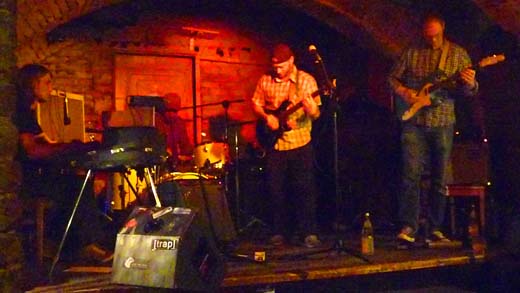 Hello out there readers! I’m still full of music  funny, my second day in a row in the Schokoladen in Berlin-Mitte, I have to say that venue is just vibratingly awesome.
Today they hosted 2 bands: The Pattern Theory from Leeds, UK and then The Drift from San Francisco. The 3 pattern guys, I don’t really know how to explain, but they seemed to live in a music bubble, played their experimental melodic (vibraphone! I loved their little vibraphone!) beautiful heartful strange-rhythmic (sometimes) tunes and invited us in. Let us drift 😉 it’s all about drifting this night  😉 Too short!

The next band is called The Drift and they drifted even more, 4 guys, a deep dive into groovy jazzy warmblooded spacy spicy sound. One member of the band, Safa Shokrai, explains (on their homepage): You could call it jazz-punk or jazz-rock or post-rock or, as we call it, „post-beard-scuba-vibe.“ Thank you guys!

And talking about drifting  this very early morning when the sun just got up (must have been 5?) I was . er  drifting between two universes, half dream half reality and I heard an early morning bird, a blackbird, in my back yard where my sleeping room is open to. That blackbird sang tunes. Phrases. Lines. Stopped after let’s say a minute and restarted with another tune. In my half-awake state I followed the tune and discovered  patterns. That clever bird took patterns and changed them from song to song. I was deeply amazed in my halfconsciousness. I realized it took notes, rearranged them, repeated, modified, varied  incredible, that little beautiful bird. And it received answers! From other blackbirds! Jeeeeez!!! I swear I’ll make a film called Das Amselnetz / The Blackbird Net!

(blue blackbird-lamps in the Schokoladen)

On the hunt for music pearls I went to Schokoladen-Mitte (Ackerstr. 169) and found two different masters: the opener band was not a band but a single guy (Cedarwell from Wisconsin, USA) who looked a bit out of time and Jesus / hillbilly – like with his rural checkered shirt (that he said is too tight for him now because on his tour through Germany he has grown addicted to German food like Brezel (pretzels) ) whatever, with his glowing Apfelbäckchen (apple cheeks) and his good loud voice and weird lyrics he fascinated me. Songs about restless journeys through Schafficker states (as we call them which means sheep fuckers) states like Montana and the like  and god and love.
What an amazing guitar player! 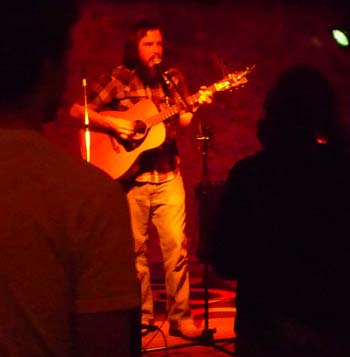 And then on stage: Monotekktoni.

I’ve seen her only on the almighty internet as an experimental electronic woman but tonight she almost took my breath away. It was analog time now and she played, no, she almost fucked the piano and together with her strong beautiful voice it was an amazing performance, so powerful! Thank you. 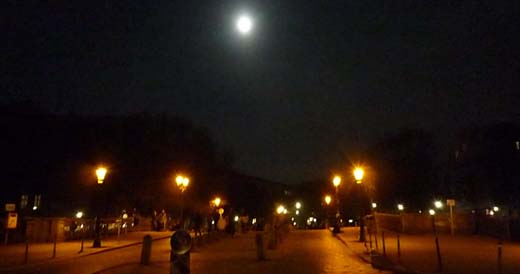 On my way back home (I got tipsy with all that springtime blossom smells lingering around and attacking me) I crossed my neighbor Admiral Bridge which has been for a couple of years now a meeting point for people and musicians from sundown until late in the night. I often pass and find unique situations and unique small good bands there. But one thing, guys, friends, foreigners: try to NOT crash your beer bottles as a sign of alleged revolutionary act or pure dull attack of puberty  it really sucks to step through the shards the next day. Peace and brain for all of us! 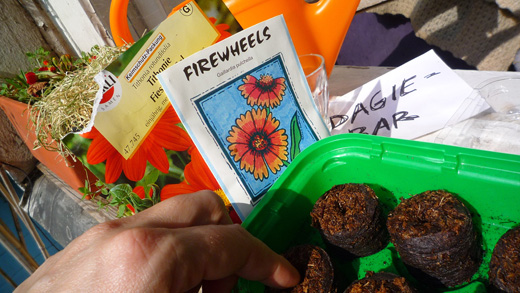 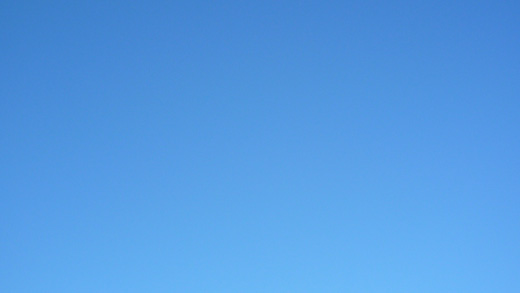 All day long there was that big blue high sky, I wasn’t able to turn my eyes away, so incredibly heart-heating after 6 months of grey shit.

And then there was that band there tonight at Café Aufsturz in tourist-overloaded Oranienburgerstrasse  called Formelwesen what kind of music? I have no idea about jazz but I found it very jazzy, very rhythm-lustfull, quite experimental and absolutely professional. I want to lay a laurel wreath as a crown on the drummer. It was a pleasure to listen to them deeply and to watch them (behind a semitransparent curtain with beautiful projections on it. But in the end they unveiled themselves: nice guys 🙂 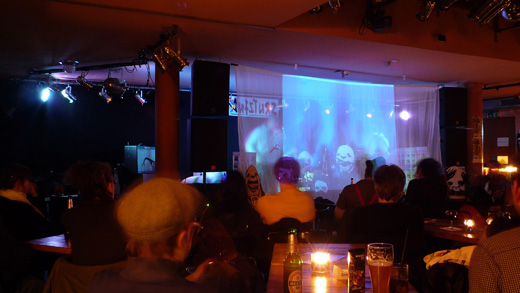