We call it BERGFEST in Germany meaning MOUNTAIN FEAST – the first half is done. Mountain up. Then there’s the peak and then it’s going down. Not literally. It can be more up than ever.

We celebrated harvest today. Thanksgiving!! We watched our freshly processed super 8 film rolls today. One black+white we shot in the very beginning in the Echo Park — The Making Of … (awesome! We filmed each other, names and motion, beautiful timing and just the right clicks!, and 2 color animation rolls (Duck Race and Fruit Salad) and some more … We were all quite tired and laidback and enjoyed the quiet mood of just watching and letting the images rattle on the little ELMO projector.

I tried to transport the super 8 spirit to my students. The so called Wabi Sabi. Meaning (stolen from Japanese aesthetics describing beauty in imperfect, impermanent, incomplete things and existences.)
I showed them (world premiere!) my 32 minutes long ODE TO JUNE that I made in the month of June trying to capture the June-freshness and the banality and beauty of every day occurences — diary-like — like making coffee, riding bike, sitting on the balcony, talking to cats, … to be continued … and I thank Carla for saying (hope that I get my words right) like — I thought I should be more worried about having a plan to film my film over the weekend but now I see I can be relaxed and see what comes … hope I get you right Carla … and Jorge saying that he would love to film parts of LA that he sees now that he’s kind of grown up and gets around more and often felt like saying to his friends (car riding): stop now! I gotta take this image now! Stop talking! Let me film! Now!
If I inspired you with my June stuff I’m satisfied. Good night! xxxxx to be continued xxxx 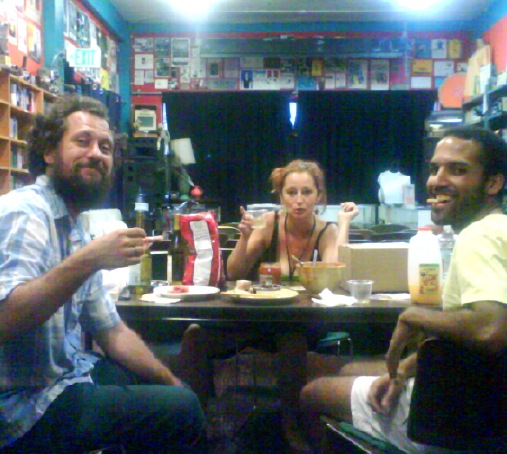 Paolo, me, and Matt celebrating Mountain Feast in the Film Center.